PLUS: Vitalik thinks UNI should become a price oracle.

The biggest news of the week came from the likeliest of places: Elon Musk’s Twitter account, where he tweeted out an announcement putting a halt on BTC purchases for Tesla vehicles due to the environmental concerns associated with Bitcoin’s proof-of-work consensus algorithm.

Outside of Elon, Tesla, and Bitcoin, a few other big names made waves in crypto:

In other news, two DeFi exploits lost over $30 million combined this week, with one attacker using flash loans to instigate the hack. And, finally, Ed Carpenter will be racing a Bitcoin Car at this year’s Indy 500, thanks to Strike CEO Jack Mallers.

On Unchained, I moderated an interview for Paxos between Robinhood CEO Vlad Tenev and Paxos CEO Charles Cascarilla. Tune in to hear both Vlad and Charles talk about what really caused the GameStop saga to occur, why traditional financial infrastructure is broken, and how blockchain technology could change the future of settlements. On Unconfirmed, Jeff Dorman, the chief investment officer at Arca, comes on to the show to give a macro perspective on crypto, explaining why meme-coins like $DOGE and $SHIB have become so popular, why $ETH is reaching new heights, and why he doesn’t think Tesla’s recent decision to stop accepting BTC as payment will hurt Bitcoin in the long run.

In this discussion I moderated for Paxos, Robinhood CEO Vlad Tenev and Paxos CEO Charles Cascarilla discuss GameStop, the broken traditional financial infrastructure, and how blockchain technology may change the future of settlements.

How Elon Musk Pushed DOGE Up and BTC Down, With Arca’s Jeff Dorman

Jeff Dorman, the chief investment officer at Arca, comes on the show to give a macro perspective on the crypto environment.

On Wednesday, Tesla CEO Elon Musk said that Tesla is suspending the purchase of vehicles with Bitcoin, citing concern over the “rapidly increasing use of fossil fuels for Bitcoin mining and transactions.”

The announcement immediately sent the price of BTC plunging — because, you know, sooooo much of the Bitcoin transaction activity was people spending their BTC on Teslas. The price hit a monthly low of $46,000 before bumping back up to around $50k.

It was not all bad news, however. Tesla will continue holding BTC, hinting that Bitcoin vehicle purchases could come back if mining transitions to more sustainable energy sources.

Musk ended his announcement with a tease, writing, “we are also looking at other cryptocurrencies that use <1% of Bitcoin’s energy/transaction.” If that is the case, Tesla could be looking into cryptos running on blockchains that use proof-of-stake consensus algorithms rather than Bitcoin’s proof-of-work, which is dependent on computing power and, therefore, energy, to secure the network.

Solana, itself a PoS blockchain, has already shot its shot on Twitter, replying to Musk:

Binance Reportedly Under Investigation by DOJ and IRS

According to Bloomberg, the world’s largest crypto exchange, Binance, is reportedly under investigation by the US Department of Justice and the Internal Revenue Service. Bloomberg reports that officials from the DOJ and IRS have “sought information from individuals with insight into Binance’s business.”

US investigations are not new for Binance, as the exchange faced an inquiry from the CFTC earlier this year.

In response to the news, CEO Changpeng Zhao tweeted:

Vitalik Donates to Charity Thanks to Meme-Coins

Earlier this week, the Dogecoin knock-off Shiba Inu, which is named after the dog from the Dogecoin memes, went on quite the moonshot, making token holders incredible amounts of money. Igor Igamberdiev, a researcher at The Block, reported that one person took an investment of 37.65 ETH and turned it into a whopping $2.05 billion — at one point, at least.

The self-proclaimed Dogecoin killer had a market cap of over $10 billion, briefly making it a top 20 token. A total of 1 quadrillion SHIB have been minted, with half, over 500 trillion coins, going to a public address of Ethereum creator Vitalik Buterin in a supposed burn. The other half of the coins were sent to a Uniswap liquidity pool and can be bought and sold on multiple exchanges, including Binance.

However, on Wednesday, Vitalik decided to take an active role in SHIB and two other meme-tokens, AKITA and ELON, by selling the tokens instead of acting as a passive burn account. The co-founder of Ethereum netted 15,719 ETH, worth about $63 million, in his sale of 660 billion SHIB, 140 billion AKITA, and 43 billion ELON.

Buterin immediately sent the proceeds from his meme-sale to charities, including Givewell, the Methuselah Foundation, a COVID relief fund for India, Gitcoin, and Charter Cities.

Larry Cermak, director of research at The Block, speculated that Vitalik’s token dump stemmed from the tokens clogging up Ethereum, which consistently caused gas fees to go over $400. He also mused:

It was a busy week for Vitalik. In between his charitable activities, he posted on Uniswap’s governance forum, proposing that Uniswap’s UNI token should become a price oracle in the same vein as a Chainlink — but simpler, with a strict focus on price rather than data feeds. A UNI price oracle would specialize in wrapping real-world numbers into smart contracts on Ethereum.

Buterin also saw Ethereum reach a $500 billion market cap, overtaking JPMorgan and Visa in market capitalization, with ether breaking $4,300 for the first time. For context, when BTC hit a $500 trillion market cap in December of 2020, it only took roughly two months to break $1 trillion in February 2021.

This week, the U.S. Securities and Exchange Commission released a staff statement that described BTC as a “highly speculative” investment, which is a tough turn of events for those waiting for the vaunted bitcoin ETF to be approved.

The timing of the SEC’s note was especially inopportune for Cboe and VanEck, which both made headlines this week in the crypto ETF space. Cboe, a traditional exchange, acknowledged its support for Fidelity’s Wise Origin bitcoin ETF application. Without an exchange like Cboe coming on board to support the ETF, the SEC would not consider the Wise Origin application. VanEck, an asset management firm, filed a proposal for an Ethereum ETF with the SEC. VanEck already applied for a bitcoin ETF and is awaiting the SEC’s answer, which could come as early as June 17th.

In the meantime, a crypto company ETF run by Bitwise launched on the New York Stock Exchange under the ticker symbol BITQ. The ETF tracks a list of 30 public companies with significant exposure to crypto — such as Coinbase, Microstrategy, and Tesla.

As of now, there are ten crypto ETF proposals on the SEC’s docket.

This Week in Crypto Adoption:

Facebook-Backed Diem Is Coming to the US

On Wednesday, the Diem Association, formerly known as Facebook’s Libra project, announced the withdrawal of its application for a Swiss payments license. The association, made up of 26 financial firms and non-profits, will be relocating to the U.S. Diem says it will register with FinCEN and partner with Silvergate Bank in order to issue its long-awaited stablecoin. Silvergate will both issue and manage Diem USD, which will be a dollar-backed stablecoin.

Diem has had an arduous journey so far, including two significant hurdles:

In other stablecoin news, Tether, for the first time since 2014, revealed the breakdown of its reserves as part of its settlement with the New York Attorney General’s office three months ago, which requires an ongoing publication of the assets backing USDT. 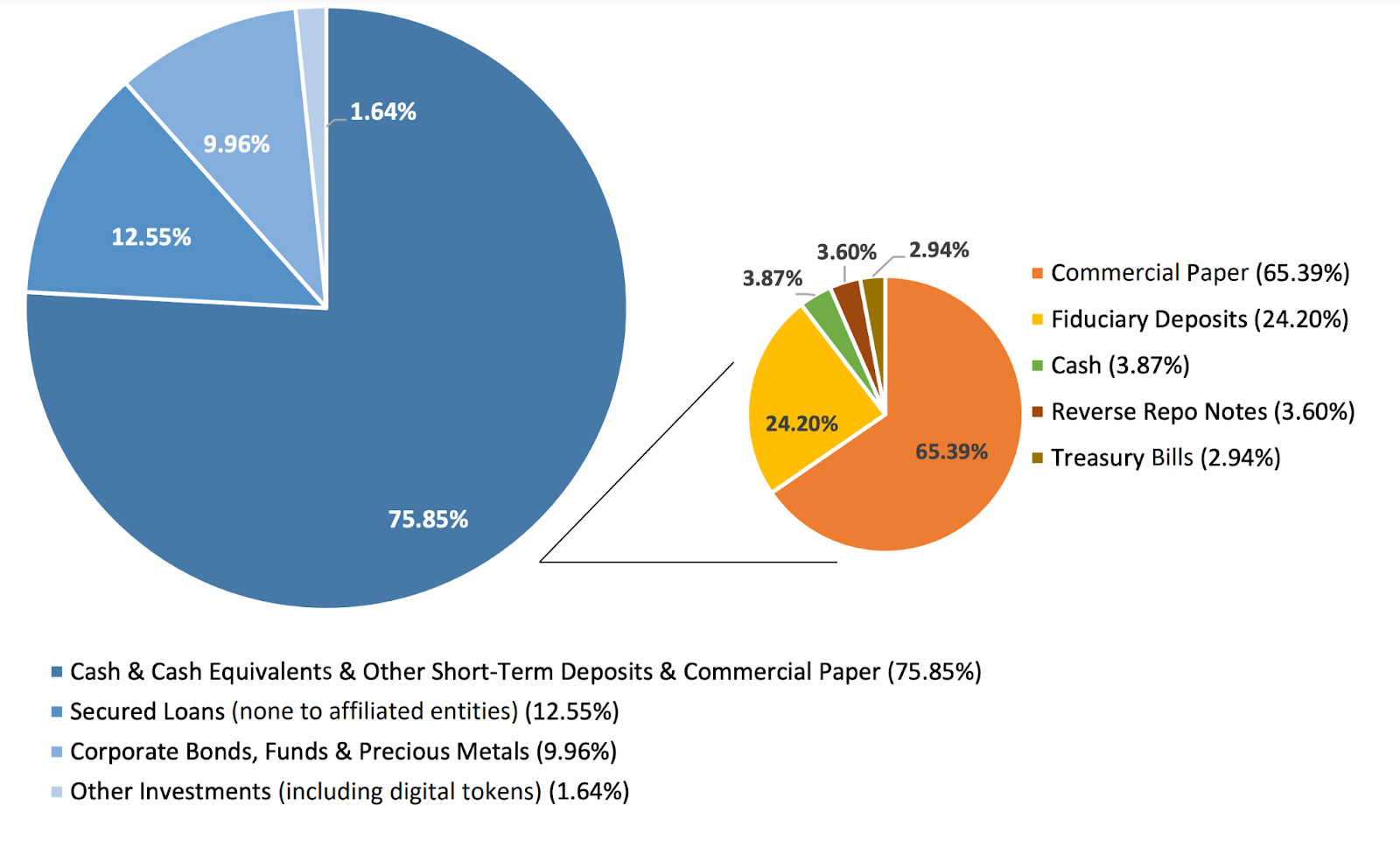 When Tether initially launched, USDT claimed to be backed 1:1 with US dollars. In 2019, the company changed the wording on USDT to being backed 100% by Tether’s reserves, which, it seems, is still company policy today.

The current market cap of USDT is over $50 billion.

’This Is the Bitcoin Car’

At this year’s Indianapolis 500, racing fans, a national TV audience, and HODLers alike will have the chance to root on car #21, the Bitcoin Car, driven by Ed Carpenter. Carpenter, in partnership with Strike CEO Jack Mallers, is forfeiting all sponsors this year.

According to Mallers, Carpenter is racing for “Bitcoin awareness and Bitcoin open-source development.”

In a blog post, Mallers made it quite clear that the sponsorship is not for “the Strike car, the Coinbase car, the Kraken car, etc. Why? Because fuck that, nobody wants to cheer for that. This is the Bitcoin car.”

The car, along with the team uniforms, is bedecked with orange BTC logos atop a black paint job — you have to see it to believe it. 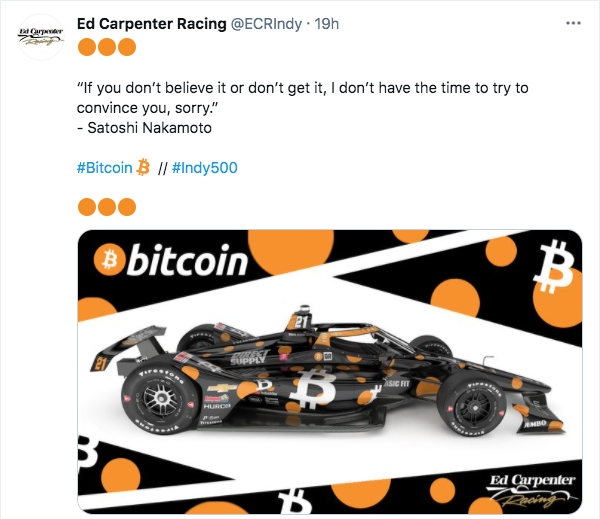 *editors note: it’s a travesty this vehicle is not named The Bitmobile