Bitcoin literally has your back. #SquidGame pic.twitter.com/9tCgm9gelC

The CEO of JPMorgan Chase is not a fan of Bitcoin and hasn’t been a fan since 2015. Here’s a quick timeline: 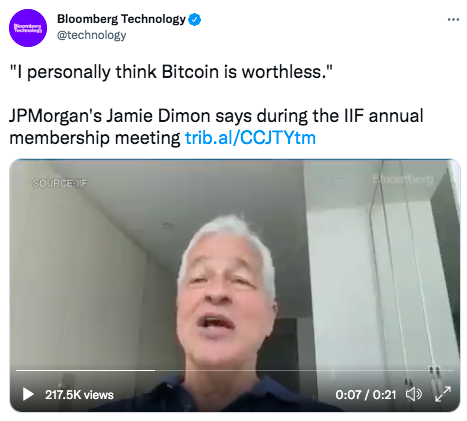 Dimon went on to clarify that his stance on crypto will not affect that of JPMorgan’s. “My own personal advice to people is: stay away from it. That does not mean the clients don’t want it,” Dimon said. “This goes back to how you have to run a business. I don’t smoke marijuana, but if you make it nationally legal, I’m not going to stop our people from banking it.”

The CEO has seemingly held to his word, as JPMorgan has been active in the crypto/blockchain industry for years. In 2017, JPMorgan created JPM Coin, a digital currency to be used commercially. The news coincided with the launch of Onyx, a business unit specifically focused on crypto and blockchain. In March of 2021, JPMorgan unveiled a cryptocurrency exposure basket, giving investors indirect access to crypto through companies like Tesla and MicroStrategy. In August, the bank partnered with NYDIG to give private bank clients access to Bitcoin.

Additionally, in an October note to clients, JPM’s cross-asset strategist Nikolaos Panigirtzoglou expressed a bullish opinion on Bitcoin as a store of value. “The reemergence of inflation concerns among investors has renewed interest in the usage of bitcoin as an inflation hedge,” he wrote. Adding, “Bitcoin’s allure as an inflation hedge has perhaps been strengthened by the failure of gold to respond in recent weeks to heightened concerns over inflation, behaving more as a real rate proxy rather than inflation hedge.” Visa Is Building Infrastructure for NFTs, Smart Contracts, and L2s. Why?