Without further ado… here is the third edition of the Unchained Daily.

Saturday is the 11th anniversary of “Bitcoin Pizza Day” — a celebration of the first Bitcoin transaction… when Laszlo Hanyecz spent 10,000 bitcoin for two pizzas (those 2 pies are now worth $400,000,000). Launching on Saturday, Bitcoin Pizza is partnering with neighborhood pizzerias in 10 cities to bring hungry HODLers quite the menu: According to Pomp, 100% of profits from this pilot program will be sent to the Human Rights Foundation Bitcoin Development Fund.

Ironically, and hence the meme, Bitcoin Pizza does NOT accept its namesake, Bitcoin. 😂 Over the last seven days, CoinShares reports that digital asset investment products saw a net outflow of $50 million, which is the first net outflow since October 2020 and the largest since May 2019. 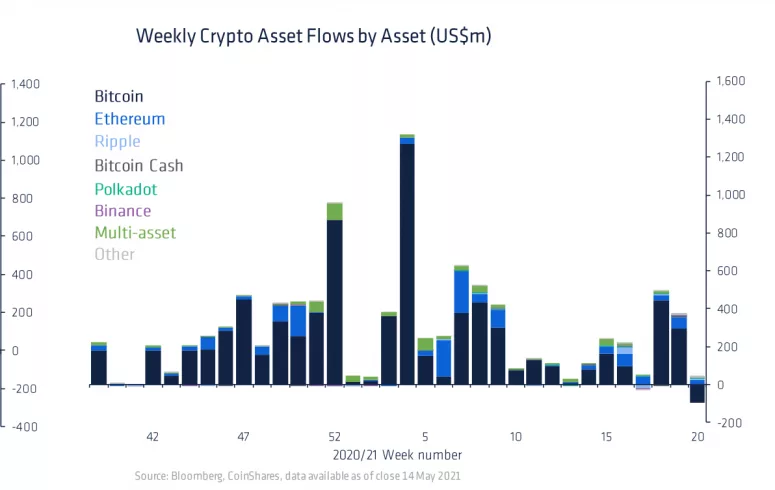 Shockingly, the prime suspect of the outflows were Bitcoin investment products, which accounted for $98 million flowing out of the system.

CoinShares noted that other digital asset investment products saw inflows totaling $48 million over the last week, implying that investors might be diversifying their crypto portfolio.

Interestingly, Ethereum accounted for $27 million of the inflows, continuing the trend of ETH outperforming BTC this year. Indeed, as pointed out by Meltem Demirors, chief strategy officer at CoinShares, “May is the first month ether products traded > volume than bitcoin.” 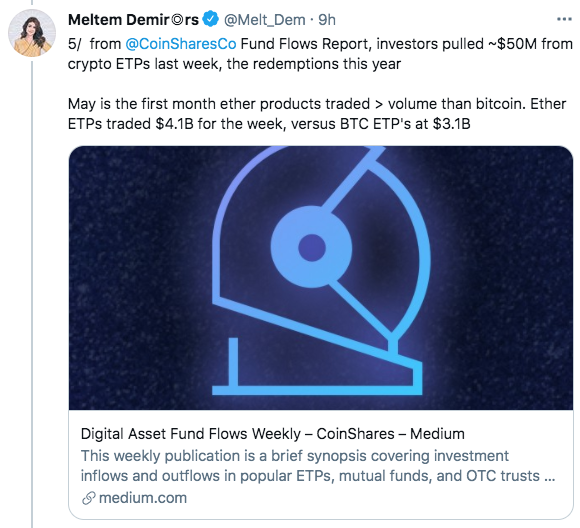