Yesterday, the DeFi Education Fund announced the sale of half of the one million UNI tokens that it received from Uniswap’s treasury roughly two weeks ago. 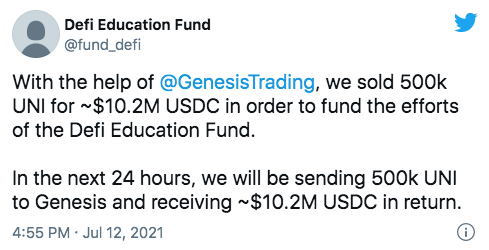 The sale somewhat contradicts the initial proposal, which outlined a plan for the tokens to be allocated over a 4-5 year period — to not dilute UNI’s price.

The DeFi Education Fund proposal was passed by Uniswap DAO members on June 29th, totaling nearly 80 million votes in approval versus roughly 15 million against. The proposal’s approval awarded one million UNI tokens to fund and create to the DeFi Education Fund, a 501(c)(4) non-profit intended to provide grants to further support existing and new political groups engaged in crypto policy and/or lobbying.

Focused on educating policymakers, funding research, providing legal firepower, articulating the promise of DeFi, and creating best practices, The DeFi Education Fund is headed by a group of seven committee members in charge of handing out grants from the fund, which is currently valued at ~$20M.

Stemming from the Harvard Law Blockchain and Fintech Initiative, the proposal had to go through three phases of approval, Temperature Check, Consensus Check, and Governance Check before being put into action. After initially naming itself a “defense” fund, it rebranded to education, easily earning enough votes to get approved.

Not everyone, however, is excited about the fund, especially after the $10M sale converting UNI to USDC. 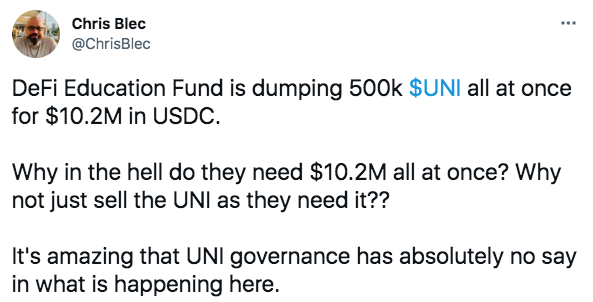 Indeed, many are frustrated the bill was even passed in the first place.

Much of the ire is focused on student organizations, which accounted for 1/3rd of the votes on Uniswap’s last proposal, according to Messari’s Jack Purdy. 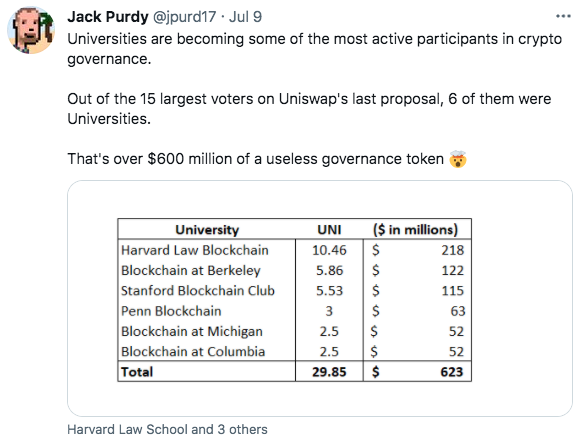 HsakaTrades, a crypto trader, went so far as to call Uniswap’s decentralization into question, noting that many of the student orgs are a16z delegates:

The lack of decentralization amongst voters is apparent to anyone looking at the results of the Consensus Check, which shows that 75% of votes in favor came from just a few large addresses, including HarvardLawBFI (10.46 million UNI), the Ethereum Foundation’s support specialist Kenneth Ng (10.25 million UNI), former partner at Andreessen Horowitz Jesse Walden (8 million UNI), and UCLA Blockchain (5 million UNI).

The Temperature Check was even more drastic, with over 99% of approval votes came from just six wallets. 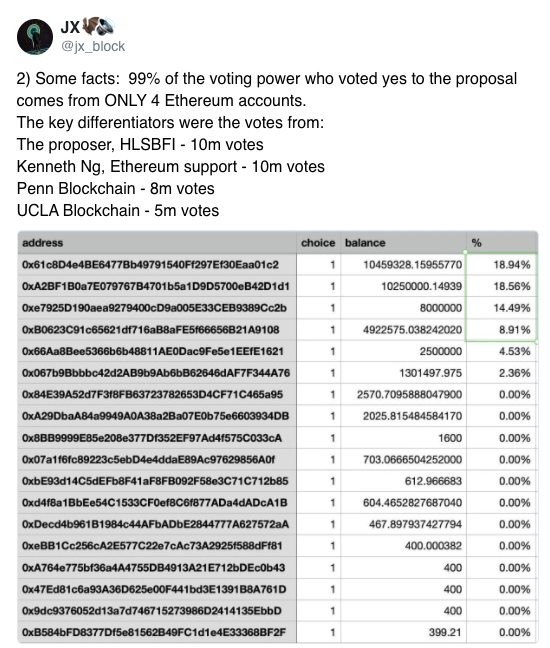 In total, the $20M DeFi Education Fund grant makes up less than half of a percent of Uniswap’s $3B treasury. The stakes are low. The DeFi Education Fund will not make or break Uniswap/DeFi. Yet it is a good reminder that most DeFi protocols are still working towards the actual decentralization part of their existence. Can a DAO Go to Court? According to Two DAO Legal Experts… Probably